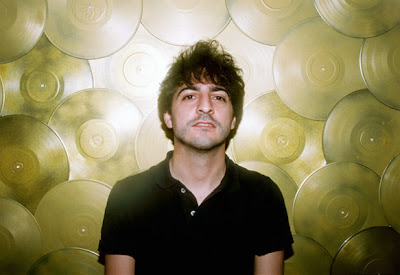 [mp3] El Guincho: "Bombay"
It seems were locked into a good bout of summer doldrums as the heat (and work) wavves press on. With the beach on our horizon - vacation in less than two weeks yall - we were ecstatic when a new El Guincho track popped up in our box yesterday. While the beats are dialed down a tick from the grand heights of his fantastic debut Alegranza "Bombay" (the title inspired by Pablo’s choice of gin that night) is no less joyful or exuberant. Laced with a pop-addled nostalgia laid atop steel drums riffs this tune is perhaps better suited to a late-afternoon cocktail more than a late-night cumbia-infused dance raver. Either way we'll take it. The new album Pop Negro drops this fall on XL. From the press release:

["Bombay] deals with “when something in your life suddenly changes and everyone around you tells you that you've changed a lot, that you're not the same anymore. But it's the circumstances that really makes you look different, it's how they look on you in the new context that distorts their perception.”

‘Bombay’ was tracked in four different studios, in Berlin, Madrid, Gran Canaria and Barcelona and was mixed by Jon Gass (Grammy nominated mixing engineer who among others, worked on Babyface and TLC’s game changing R&B).

Like the recent covers EP, Piratas De Sudamerica, there are no samples involved, Pablo creating all the sounds himself.

Dictated but not read by StarkNY at 10:01 AM