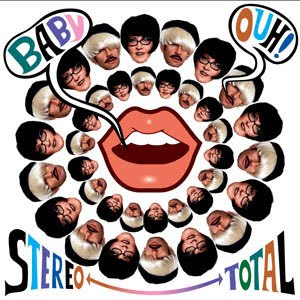 What do we know about Stereo Total? Not much. What do we think of the title track from their newest album, Baby Ouh! out now on Kill Rock Stars? Mixed feelings. Being the suckers that we are for French-speaking music and a good dance beat (See: Yelle), we gave it a shot; plus, Kill Rock Stars very rarely leads us astray. Baby Ouh! is a Frankenstein of a release -- ST recorded over 40 tracks in preparation for this release, while only 17 made the final cut. Currently hanging their hats in Berlin, Germany -- ST are gearing up for a North American summer kicking it off at NYC's Le Poisson Rouge on Aug. 25. This album marks the band's 11th release to-date starting in 1995 with their debut, Oh Ah!

Dictated but not read by thestarkonline at 11:17 AM