Waiting For The Bells 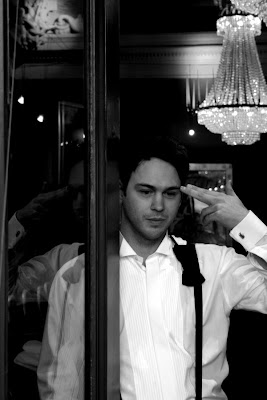 [mp3] Joel Alme: "You Will Only Get It Once"
About this time last year, a random Pitchfork staffer told us their favorite album of 2008 was Master of Ceremonies by Joel Alme. Never heard of him. Yet, research we did, and not surprisingly Master of Ceremonies was a sweeping, emotionally-charged masterpiece. Alme sings with a passionate recklessness, charmingly out of key at times, but with true power and meaning. His melodies are romantic and laced with strings and horns, but they never sound sappy or contrived, and they easily could. This is real stuff.

Last night, we realized he had a new album coming, so we dropped a note to his label Razzia Records in Sweden, and upon waking up found the download for his new record Waiting for the Bells in our box. We've been spinning it since then, and the new record follows along the lines of his debut, but there is more soul this time around. The horns echo lines from Dusty Springfield and his voice seems more full bodied and resonant. No word yet on stateside release, but you can download it HERE. While I'm sure folks will use Jens Lekman as a reference, there is more going on here. Alme is less cheeky, but equally melodic and string laden. This record will continue to play for the next several days, and it's a smash if it's half as good as Master of Ceremonies. Check him out, we're glad we did.

Dictated but not read by StarkNY at 12:46 PM

Email ThisBlogThis!Share to TwitterShare to FacebookShare to Pinterest
Labels: Jens Lekman, Joel Alme, Master of Ceremonies, Waiting for the Bells