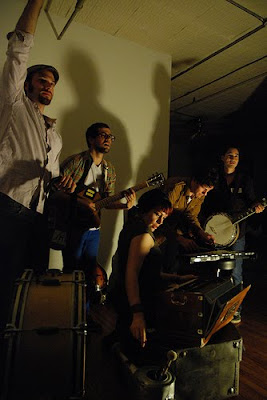 [mp3] Freelance Whales: "Generator First Floor"
I guess it's only a matter of time before a band like Freelance Whales get snatched up. I mean how many times can a single band be named a "band to watch?" Despite our snarky tone, this is really a fantastic step forward for a great band. Fans and critics pay attention to Frenchkiss, who have quietly been having a fantastic few years. While Freelance Whales can stray one or two steps too far into the Sufjan realm - they are a remarkably consistent group of rural folk-poppers with great songs and a warm nostalgic sound. They are currently on tour with Fanfarlo and are playing the Bowery in New York on December 18th. New LP in Spring 2010. Congrats y'all.

Dictated but not read by StarkNY at 5:40 PM

Great band - I can't wait for the album!