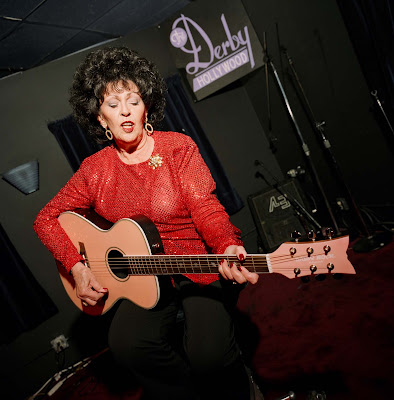 Wanda "The Queen of Rockabilly" Jackson made headlines this week with the announcement that Jack White will produce her upcoming album. This is great news for all us country addicts out there, as pretty much everyone in the entire solar system loved White's 2004 collab with Loretta Lynn, Van Lear Rose. I say "pretty much" everyone loved Van Lear Rose because Jackson herself has gone on record with some lukewarm commentary about the double Grammy winning LP. In an interview will NewsOk's Gene Triplett, The Queen made it clear that Van Lear Rose was cool and all, but HER Jack White record is gonna be, like, waaaaaay cooler.

“They had a super album, but he didn’t have her do anything different, you know,” Jackson said of Van Lear Rose. “She just did her little Loretta Lynn songs. But he told me he’s gonna stretch me some, so we’ll see. We’ll talk later.”

I can't speak for the rest of you but I certainly think country needs some more 50/Jay-Z shit slinging. C'mon Loretta, you gonna take that?

Dictated but not read by StarkNY at 8:10 AM

Am I the only one extremely grossed out by this old bird's comments on Jack White's plans for her?

Excuse me miss, uhh, this is a family blog, we're gonna have to ask you to keep things, uhh, within the realm of good taste. Thank You.