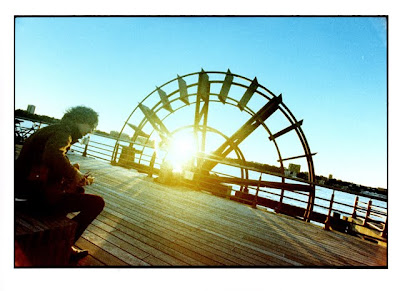 [mp3] Hurricane Bells: "This Year"
Hurricane Bells is Steve Schiltz. Now, we mean this in the most respectful way, but he's the luckiest bastard in the world. Yet, we wouldn't be posting on Hurricane Bells and telling you to see them live if the dude didn't make good music. Ah the age old music industry question, was it luck and contacts, or was it talent? It's almost always a little of both.

What are we talking about? In one move, Mr. Schiltz went from making music in his bedroom to having one of his B-Sides "Monsters" included in the biggest cinema blockbuster this side of Kate Winslet and Leo's love cruise. We're talking about New Moon, which also featured, ohhh Thom Yorke, Grizzly Bear, Justin Vernon and every other band from an indie-blogger's wet dream.

Schiltz made a great record with Tonight is the Ghost (out now digitally on Vagrant, physical in February). It's not a revelatory experience, but it has a songwriters charm to it. It's well-written, well-produced and Schiltz's vocals are quite lovely and autumnal. File this record away with the new album from Sea Wolf, and the scatter-brained yet, excellent effort from Scotland Yard Gospel Choir. All were great records that don't seem to have a home genre right now, other than "indie-rock." Tonight is the Ghost is filled with songs worthy of a better fate than "indie rock." Honestly, almost every song on this record triumphs over half of the songs on New Moon, including that Justin Vernon track. Wow is that boring. Schiltz doesn't deserve a break any more than any other writer out there, but if it had to be someone, were glad it's him.

Dictated but not read by StarkNY at 11:12 PM