What Happened to the Gaslight Anthem? 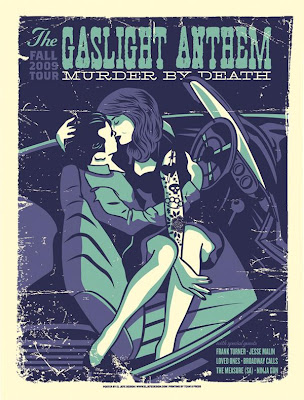 With musical connections ripe for a myriad of Springsteen comparisons, we think they may be one Cadillac short of a Heineken sponsorship. Though Springsteen has reached bro-stardom to excess, he has tapped other demographic markets that supersede such a raucous fan base. The fact that Gaslight hail from New Jersey and stomp on the grounds of Springsteen's kingdom, isn't helping their case either. Regardless, there is no substitute for the genuineness of their debut effort, The '59 Sound. When this record came blasting "through my Grandfather's radio" it knocked our fucking socks off. It permeated our pours, made us want to drink, get arrested, be a rambunctious teen again and spit in the face of the man. Since going into slight remission post-debut, Gaslight emerge to try and regain their hipster cred -- headlining a bill at Brooklyn Bowl with support from Jesse Malin, Murder by Death and Broadway Calls will definitely help that.

Take it as you will -- Gaslight @ Brooklyn Bowl on Oct. 16. We'll be there with a PBR in one hand and a Heineken in the other, letting Gaslight make the decision for us.
Dictated but not read by thestarkonline at 10:04 AM

i too was at the brooklyn bowl...it blew my mind. i was at terminal 5 the night before and both concerts were amazing. i'm a big fan of TGA and thought this was some fine work. Brian is amazing.
What did you think of the show?

The '59 Sound is actually their third release....