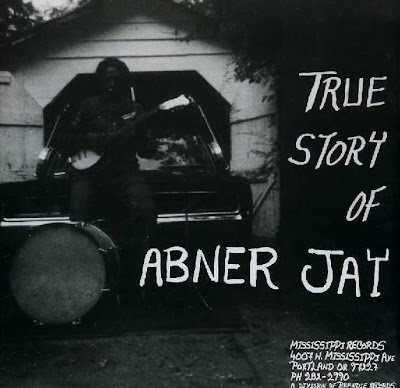 So you guys probably want to hear about our CMJ. Well, we're not ready to talk about it yet. There were bright spots, yes: Ume, the entire Sub Pop showcase, Acrylics, Awesome New Republic, Alicia Keys - but there were many many wet, frustrating, low points.

What we do want to tell you about is Abner Jay and Mississippi Records. Chris Taylor was spinning records at the Acrylics show at Pianos and something came on that stopped us in our tracks. It sounded like early Dylan mixed with Hank Williams mixed with Muddy Waters. Swallowing our pride, we approached Mr. Grizzly Bear at the DJ booth and asked what it was. An extremely pleasant, friendly and generally awesome Taylor began to spin the tale of Gerogia Blues-man Abner Jay and his most recent vinyl reissue from the Mississippi Records label. Yet, there's not much to tell about the one man band named Abner Jay. He only has a few recorded tunes to his name, but damn - dude made it count. The aforementioned Miss. Records, has built up a great cache. While not quite on that level of a Numero Group, it's easy to pick up any album from this label and be satisfied. Abner Jay will be our first.

Dictated but not read by StarkNY at 8:56 PM