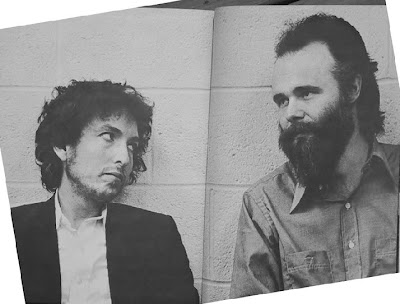 The Band taught at least a few of us around here how to listen to good music. I dare say those Canadian (and Arkansan) bastards even snatched victory from the jaws of "jam band-dom" in one particular case. Thank god for simple gifts . . . And for free gifts. Wolfgangsvault.com is offering a previously unreleased stream of Dylan and The Band's Valentine's Day, 1974 show at the L.A. Forum. Five million people sent in paid ticket orders by mail for the 650,000 tickets that were available over the course of the tour (in support of Planet Waves). It remains the most demanded concert ticket of all time. Who knew? The new live release has all the Dyan gems one really needs to hear plus some Band staples. Ain't nothin' wrooooong with that...
Photo

Dictated but not read by StarkNY at 9:55 AM