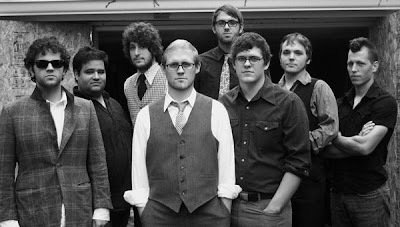 Who the hell are they? Well, there's not much to go on other than the fact that they formed out of proximity to a song score that two brothers were co-composing for a local indie film. Collaborations ensued, and in 2004, Jordan and Eric Lehning (the brothers) decided to take it to the next level, hence forth becoming The Non Comissioned Officers. Enlisting the help of a myriad of local scenesters, The Officers are an eclectic mix of musical talents. Members of this group, including guitarist Buddy Hughen, also make up the rising Nashville act Eureka Gold, who are working on a new LP that is, by all accounts, quite stellar.
You won't hear much about The Non-Commissioned Officers for some time, we reckon. They are rooted deep in Nashville's indie underground, but will soon peek their heads out briefly to release a debut EP titled, Make Out With Violence.' (Make Mine) coming out on Sept. 28. Sorry to say, but this is a Myspace-only listening session as of now. Musical references include: Brian Eno, Metric and the electro-brit pop genre.
Dictated but not read by thestarkonline at 11:15 AM

Email ThisBlogThis!Share to TwitterShare to FacebookShare to Pinterest
Labels: Eureka Gold, Make Out With Violence, The Non-Comissioned Officers

Proximaty Coloaborations. Spellcheck is your friend, guys. Also, Metric? Really? I know you can dig a little deeper than that.