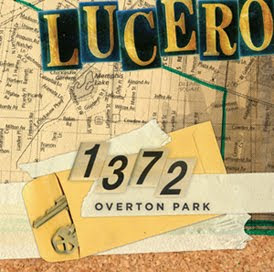 Lucero - "Smoke" (Stream Only)
1372 Overton Park, Lucero's sixth full-length record is slated for an Oct, 6 release. What makes this album special is that it will be Ben Nichols & Co.'s first LP on a major -- Universal Republic Records. After years of relentless touring through the Bible Belt and Southern states, Lucero emerge, still with dirt on their hands, whiskey in their blood, but with a major label in their pocket. As they say, Lucero now epitomizes the sentement, "hardworking band makes good." Their new record was produced by Ted Hutt (Gaslight Anthem) and features such guests as Cat Power, Al Green and Solomon Burke. Enjoy the newest track from the album titled "Smoke" for stream above. Our only concern is that Nichols' vocals come off a bit too over-produced. If the tune is any insight into how the rest of the album will progress, what we have on our hands is a rollicking-southern hybrid of Gaslight Anthem and the Hold Steady.

Tour dates after the jump.