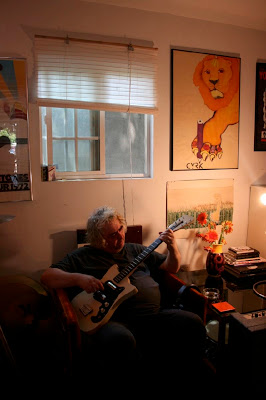 Daniel Johnston: "Freedom"
For us here at Stark, Daniel Johnston sounds like the year 1994. That is in no means an attempt to categorize the legacy of such an influential and prolific artist such as Johnston; it merely represents what that songwriter means to us, and where we were when we were first introduced to him. It was that shaky rasp of a voice that contributed to the soundtrack of those teen-years, which we can all agree were the pinnacle of the alt-rock movement. Those were the bull years. The good times. So, fast forward to 2009. Where does an artist such as Daniel Johnston fit in? Clearly venerated by critics and fans alike and christened with a saint-like status, it will be interesting to see how his new project is received. Is And Always Was (Eternal Yip Eye Music / High Wire Music 10/6) is the first Daniel Johnston record in 6 years and first with ace producer and collaborator Jason Falkner. The new record promises lofty arrangements, and lots of Beatles influences. We have the first mp3 "Freedom" above.

Email ThisBlogThis!Share to TwitterShare to FacebookShare to Pinterest
Labels: Daniel Johnston, Is And Always Was

Based on what I heard with this track, I'm saying "So far, SO GOOD!"