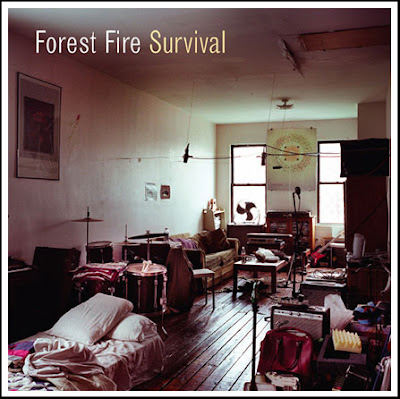 [mp3] Forest Fire: "I Make Windows"
[mp3] Forest Fire: "Fortune Teller"
We're newcomers to the sounds of Brooklyn's Forest Fire (dig their myspace URL!). We're glad we made it though. Forest Fire's debut record Survival saw a limited release last year, but those who found it praised it quite heavily. The most notable outlet to do so, the venerable La Blogotheque, named Survival their number one record of 2008. The album will finally see a proper release on Infinite Best Recordings, which will include a limited edition vinyl, of which only 300 will be produced. We've been listening to Survival over here for the past week and enjoying every minute. It's a ramshackle collection of genres ranging from country, to folk, to more straightforward jangly rock and roll. Yet, all of it mashes together into a tasteful melange of tambourine, guitar, campfire vocal harmonies and lo-fi drums. You can almost see the various musicians wandering into the makeshift studio (see above) to record their takes, relax, have some drugs and hang out. To make the deal even sweeter, one of our 2009 favorites, Sharon Van Etten sings back up on many tracks and takes the lead on track "Sunshine City."

One of our favorite blogs, Chocolate Bobka will be hosting Forest Fire at Union Hall on Monday, August 10th for their CD release party. The show also features Shilpa Ray and Holograms. According to the band "there will be an overall sense of danger in the air" there will also be cookies. You can win free tix on Chocolate Bobka by naming your favorite tree in the comments section. Check out the flyer for more details after the jump. 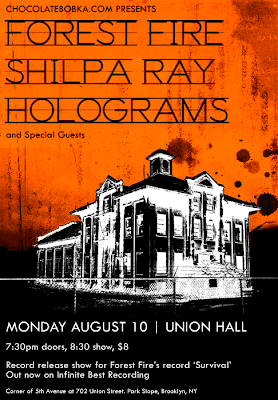 Dictated but not read by StarkNY at 11:00 AM