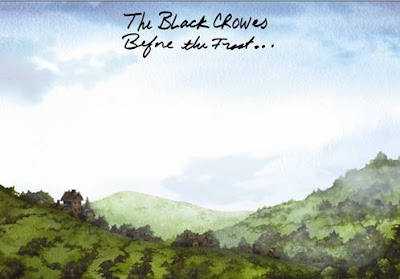 [mp3] Black Crowes "I Ain't Hiding"
As admitted previously, we've never been massive fans of the Black Crowes. Not to say they aren't a fantastic American band, but there just wasn't anything for us to immediately connect with in their music; it always felt a little distant. Yet, after reading more about their upcoming double-album package "Before the Frost..." and "Until The Freeze" our interests were significantly piqued.

The Black Crowes will release Before the Frost... on Sept. 1, 2009 on their own Silver Arrow Records in conjunction with Megaforce Records. The second half of the double album ...Until The Freeze, will be given away for free exclusively through a unique download code which is included in Before The Frost… as a thank you to their fans. Both albums (20 songs) will come out on  limited edition vinyl which the Crowes will also release on Sept. 1.

To read what get's us really excited about this record and to see tour dates, click after the jump.

The Black Crowes can be counted as one of the greastest American rock and roll bands still in existence, and perhaps one of the best ever. Yet, their songs always seemed geared to some other audience, that mainstream radio crowd. We never really felt welcome. Luckily for us, it was all still great music. Yet, on the Before The Frost... project, it seems the Crowes have sought a different aesthetic. They have always channeled classic rock and blues motifs, but it seems that the band is taking a more organic and direct approach to writing and music. They retired to our hero Levon Helm's home studio in Woodstock to record these records in front of an intimate live audience. It seems an attempt to tap into the creative roots found in some of the 70s' greatest country and blues records. Live recording, rural setting, organic writing, and great musicianship, are a long lost staples, rare in the realm of modern pro-tools, city-centric bedroom recordings. Not that that's bad, we just need something to refresh us now and again. Here's hoping the full album (waiting to hear all of it) can live up to the lofty ideals set forth by the band, and by the writing in this post.

Dictated but not read by StarkNY at 10:50 AM

Email ThisBlogThis!Share to TwitterShare to FacebookShare to Pinterest
Labels: Before the Frost..., Black Crowes, Levon Helm, mp3, Until The Freeze