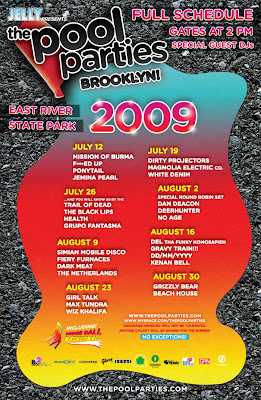 Jelly NYC presents the first Williamsburg Waterfront Pool Party concert of the series this Sunday at East River State Park. The line up: Mission of Burma,  pitchfork Best New Music receiver Fucked Up,  Ponytail and Jemina Pearl formerly of every band in the Tennessee region. Just kidding. But, she was a former member of Be Your Own Pet (their split equals tear for some folks) and former (not sure if they are still dating) girlfriend of Jeff Novak, frontman in Cheap Time (Nashville post punkers) though. It's going to be an intense Sunday to say the least.

See the rest of the summer schedule after the jump.

July 26: ...And You Will Know Us by the Trail of Dead, Black Lips , HEALTH,  Grupo Fantasmo

August 30: Grizzly Bear , Beach House
Dictated but not read by thestarkonline at 3:27 PM