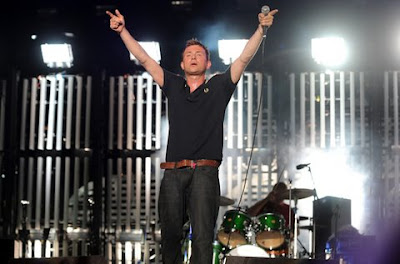 Photo: WENN.com via
[mp3] Fleet Foxes: "Blue Spotted Tail" (Live on BBC 6)
We got a great email a few days ago from a good friend of Stark, Anna Watkins, summing up her Glastonbury experience. We decided to share it with you all this morning.

"Bonjour, I am back from Glastonbury with mud on my wellies, sunburn on my face and a smile in my stomach. If ever ever you do come to England then time it for the last weekend in June and hotfoot it to a dairy farm in Somerset for a weekend of joy. Saw some ace music but the bad thing (which is actually a pretty good thing) was that there was just so much going on that I couldn't see everyone I wanted. But here are my highlights:


Friday morning it was raining and we were all freaking out that this was going to be another wash-out Glastonbury, but at about 4pm the sun came out and so did the Fleet Foxes harmonies. Just beautiful. The sun stayed out pretty much the rest of the weekend as well which was brill. Neil Young on the main stage Friday night... I wasn't getting my hopes up but Oh My Good Lord he absolutely rocked it! Guitar solos aplenty, he smashed his guitar up at the end but not before "Needle and the Damage Done", "Heart of Gold", "Down By the River", "Rockin' in the Free World" (with about 5 false endings) "My My, Hey Hey"... He showed some of the young whippersnappers we'd seen earlier what it was to be a true rocker. So many instruments, such a voice, so talented. 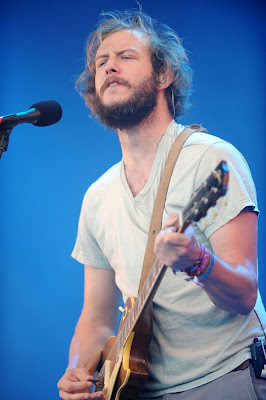 Saturday began with Dizzee Rascal who was a lot of fun and then we climbed the hill behind the main stage to watch Crosby Stills and Nash play an uber-chilled late afternoon set. Kasabian were a bit too agro after that so we headed to a smaller dance tent to watch Deadmau5 DJ (he wears an oversized robotic mouse hat the whole time which is great.) Then we made the controversial decision to sack off The Boss and go and watch Bon Iver instead. He was playing twice but this was going to be the winner - a really small intimate stage, hardcore fans, night falling - and we didn't regret it for a second. His voice transported us, people cried real tears, and for a finale he lead us in a exulted singalong of "Wolves."

The rest of Saturday night gets a bit blurry but I definitely watched the sun rise in the stone circle. Needless to say Sunday was a slow starter... I started with the Yeah Yeah Yeah's at around 5pm and Karen O won my heterosexual heart. They were amazing and if ever I needed a pick me up, they were it. I'm ashamed to admit that I forfeited Bat for Lashes to fill my empty stomach with mac and cheese but we returned to see Bon Iver play his second set (and although still amazing, it confirmed that we'd made the right decision the night before - the atmosphere then was just unmatched.) By 10pm, exhausted but happy we managed to drag ourselves back to the main stage for Blur. I don't know if you guys ever listened much to Blur but they and Oasis were basically the soundtrack to an English 90s childhood. They split up about 6 years ago and this was the first time they'd played since. Wow, what a comeback, they played a greatest hits set that reminded us just how many great hits they had. I was on my friend's shoulders for "Tender" and "Song Two" and I just saw this sea of people. We sang along to every word for 2 hours. It was a pretty perfect ending to a pretty perfect weekend.

Wow, I didn't mean to go on such a ramble. If you managed to read all that well done you! I think I just had to get it off my chest, it was seriously amazing.

Dictated but not read by StarkNY at 7:44 AM