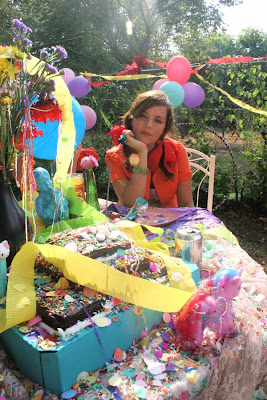 [mp3] Tristen - "Speacial Kind of Fear"
As the days wear on, one giving away to another, senses heighten, ears perk, and anticipation mounts as we are now on Showcase Countdown Day: 4. We at Stark enjoy one word, two syllable artist names: Jaymay, Xylos and subject two: Tristen .

From the Windy City, to the underbelly of Nashville, Tristen (Gaspadarek) has been polishing her pop roots with country dirt. Music City is a haven for starving songwriters, creative minds, string ticklers, finger pickers, country heroines, whiskey, beer and bad decisions. While Tristen dabbles in a few of the above, her songs evoke a timeless quality built upon fluid songwriting.

Joining forces with local musicians and best friend Larissa Maestro (a graduate of Berkley and a cellist) Tristen has found what she left home for: a cohesive sound strengthened only by her resolve, powerful voice and hook-laden song structures.

She has a day job waiting tables, but like most in Nashville, the dream outweighs reality. More on Tristen after the jump Including album details and tour dates.


Aside from her appearance at the Stark/Jinners showcase (6/13), Tristen will be playing in NY at the Lakeside Lounge on the 17th before traveling to Ithaca and Boston for 3 more shows.

Tristen has just put the finishing touches on a tour EP comprised of songs taken from her upcoming LP Charlatans of the Garden Gate that she is recording in Nashville with producer Jeremy Ferguson. The tour EP is handmade with care and can be purchased at her live shows exclusively. Tristen is part of a budding musical scene growing out of Nashville at the moment. Along with local favorites such as And The Relatives and Caitlin Rose Tristen has begun to gain solid backing from the press and is bringing her music to the people on an increasingly national scale. "Matchstick Murder" is being used in Five Star Day, a film which will be premiering at the Toronto film festival. Tristen is hoping to make the trip over the boarder for some dates there coming up later in 2009.

For now though, Tristen is focusing on finishing Charlatans, booking an upcoming Southeastern US tour, and of course, getting ready to play our Northside showcase.

Dictated but not read by thestarkonline at 3:00 PM

I had to type up the list of band members/showcase organizers for Northside today, and now know you and your brother's shoe size. How do you feel about this?

tristen has a unique and dreamy sound flowing through her. i hope to hear more soon, thanx!