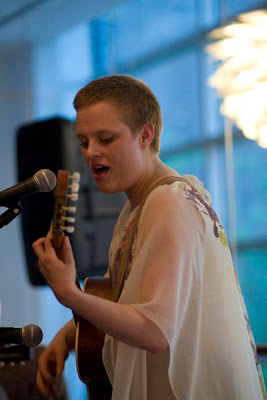 Photo: Chris La Putt for BV
While there is a TON of Northside Festival stuff going on tonight, including a BBQ at Studio B and the Hold Steady at Music Hall (BV has a good round up of events) our picks for tonight are the amazing bill of Olof Arnalds and Sharon Van Etten at Union Pool, and Ducktails at Cameo. Ducktails produce a gauzy, summery-sounding electronic music that is as pleasant as sipping Campari while sitting on a plastic beach chair around an inflatable kiddie pool somewhere in New Jersey. We mean that in a cool, badass, fun kind of way.
ANYWAY. We would be remiss in not expounding again on how great Olof Arnalds and Sharon Van Etten are. Listen to their music on myspace (click their names) and see for yourself. We're heading out to pick up our badges and shoes!!
Dictated but not read by StarkNY at 5:34 PM