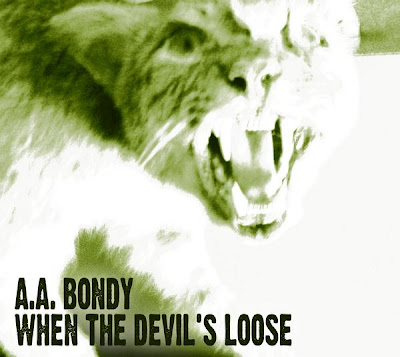 In 2008, Fat Possum re-released A.A. Bondy's fabulous, yet underrated, debut album American Hearts that Superphonic initially released in 2007. Now, in 2009, Fat Possum and A.A. Bondy team up again to release When The Devil's Loose on Sept. 1. We were lucky enough last year to catch a triple bill that included A.A Bondy and Deer Tick. Both artists, together with Sam Baker, are some of the most legitimate descendants of the lonsesome blues swagger of the late-great Townes Van Zandt. We have yet to hear more than one track from this new record, but the press release promises a full band, and a larger, more diverse sound. American Hearts was a sparse affair, which leaves us somewhat nervous about meddling with a formula that worked so well the first time around. Yet, we have faith in the talent of one Mr. Bondy and the title track sounds damn fine on his myspace. When The Devil's Loose is certainly one of our eagerly anticipated fall releases. Wow. Fall releases already. Bondy is in the midst of a large US tour. Get the deets after the jump.