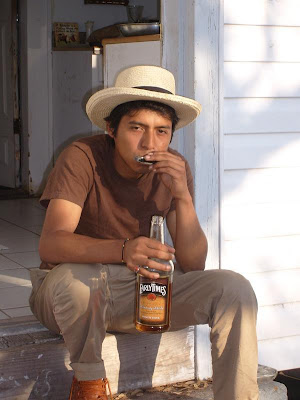 After our fantastic showcase there, Cameo/Lovin' Cup Cafe has become a new favorite hang for some of the Stark staff. Cheap beer, good company and some excellent 'tots make for a good combo. So Sunday night we sauntered over to catch roommate Bella Watt's show, and were stopped in our tracks by Willy Gantrim, who was playing solo acoustic in the front of the cafe. He recalled a cross between Dylan, Deer Tick and Tallest Man on Earth - a potent and awesome combo. Rocking a pseudo-pompadour, Gantrim had a mysterious air about him, and his dusty South Western Americana songs complimented the entire scene perfectly. His songs were excellently crafted and executed in an honest and humble manner. We don't really know what his deal is around the scene at-large right now, except that he plays Lovin' Cup frequently. It was a fantastic discovery on a lazy Sunday night. He sells a 17 song record at his shows, which we haven't fully digested yet, and is playing 3 shows coming up in the Brooklyn/NY area. See his dates and hear samples at his myspace. We want more, now.

Dictated but not read by StarkNY at 12:32 PM

He's a Lovin Cup regular and amazing. Glad to see him getting the attention he deserves. Willy!