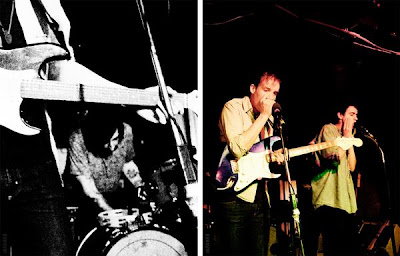 [mp3] Little Girls: "Tambourine"
On a shit day across the east coast we should probably be posting something brooding and melancholic like James Blackshaw, or maybe ya know, like Coldplay. But instead, we're feeling a little ballsy, so we decided to throw up a post on a band we've had our eyes and ears on for a good amount of time now, Little Girls. Little Girls are some friendly Canadians who constitute another entry into the noise rock cannon of '09. Some of you may tune out at those words or the inclusion of another band with "Girls" in their name - but don't fret - this is a band that should be heard. Take some time, and work through their recently released EPs out now on Mexican Summer and Paper Bag Records. For our money, Tambourine is the one to get. It's a melodically stronger and an all around tighter effort. The tune above probably won't lift your mood, but it will probably piss your boss off. Go for it. They play July 8 at Cake Shop July 10, at Cameo with Japandroids and July 11 TBD.

Dictated but not read by StarkNY at 2:18 PM