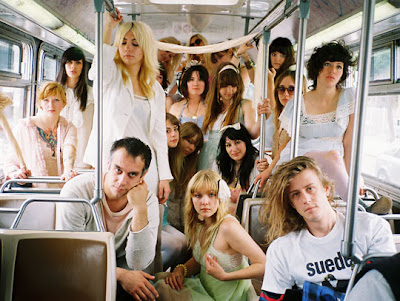 We posted the great video for Girls' newest tune "Hellhole Ratrace" last Friday, and today we get news that their debut full-length Album is due September 22 on True Panther Sounds in conjunction with Matador. While we've only heard the epic single, we're certainly looking forward to hearing the rest of this record. From the Matablog:

Built on the powerful songwriting of Christopher Owens and the ethereal production of Chet “JR” White, Girls recorded Album in a variety of bedrooms and rehearsal studios in their adopted hometown, San Francisco. The resulting 12 tracks are the perfect San Francisco summer record, evoking a narcotic, sunny afternoon in Dolores Park, yet promising the eventual hangover of summer’s departure. Album is a redemptive song-cycle about the various characters and desires that color Christopher Owens’s life. Described by the band as “honest, loose, ethereal, obnoxious and perfect,” it is a sincere tribute to the majesty of great pop music and the healing power of rock and roll.

Dictated but not read by StarkNY at 3:20 PM