Two Great Songwriters Get Their Due 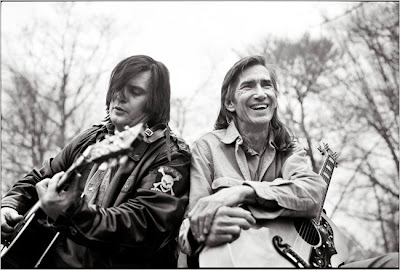 The younger siblings always seem to have it better. Often making the same mistakes as their elders, but avoiding the pit-fall consequences that inevitably befell those that came before. Such is the case with Steve Earle, the protege of legendary artist Townes Van Zandt. This Sunday, the New York Times sought to give Mr. Earle the proper recognition he deserves, something they may have failed to offer to Mr. Van Zandt. Perhaps realizing their fault, Anthony DuCurtis used adjectives such as "genius" to describe Townes Van Zandt.

While we're not here to re-write Mr. DuCurtis' feature, we're here to direct you to the piece and tip our hat (again) to the genius of both Mr. Earle and Mr. Van Zandt. They lived parallel lives, both struggling with addiction, and for the most part, staying within the shadows of the mainstream music industry. Yet, like the dutiful younger student he is, Earle sought to correct the mistakes of Van Zandt by getting clean and taking the right steps to correctly position himself in the eye of the industry at large. Steve Earle's latest album, Townes, comes out tomorrow and is an amazing tribute to his mentor. Earle's record does its best to reveal mistakes already made and to light the path for younger proteges in hopes that they can avoid the traps that so ensnared two of the greatest songwriters of the modern era.
Dictated but not read by StarkNY at 10:40 AM