Mom At Large: The Killers in Camden 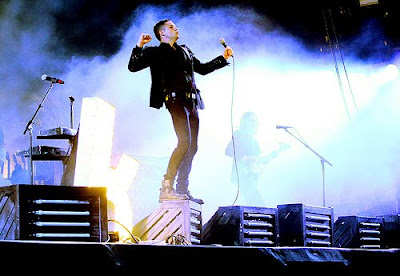 Photo: Guy Eppel
So as a special post-Mother's Day treat for you all, my MOM(!) has offered up her awesome take on the recent Killers' show in Philadelphia. Check it out!
Anticipation was high! I’d been waiting since January to see The Killers perform live and that time was finally here. Being from the Phila. area, the closest place for me to see The Killers on their original tour was Madison Square Garden. That turned out impossible for me to get to, so when I saw they added some shows to their end of the tour and one was only 45 min. from my house, I was online immediately and got some friends together to get tickets for the show.

And we were not disappointed. The Killers' stage was set with palm trees and a very tacky-looking large fake potted arrangement of flowers. We couldn’t quite put the pieces together on this strange choice of stage decoration until Brandon Flowers came out (totally clad in black) and announced to the audience something about their show being sponsored by something in Las Vegas. Since I knew the band was from Vegas, it now all began to make sense...

For more of the review, keep reading after the jump!

“Joyride” was the opening song; I had been expecting “Human” based on checking the set lists for the previous shows that week but “Joyride” was great. They continued with one hit after another and ended up playing “Human” about 6 songs into the set. We all agreed that it was kind of a strange placement for this hit; we would have preferred them to either open or close their set with it. It got lost being in the middle of the set, but of course, the audience loved it. The audience basically loved the whole show.

From the opening song to the final of 3 encore songs, (“Bones", "Jenny was a Friend of Mine", and "When We Were Young”) the audience was on their feet and never sat down. People danced and sang to every song with a lot of fist pumping and jumping up and down. That’s the kind of reaction The Killers create with their music. Flowers was high energy, running all over the stage, from left to right and back again, standing on the speakers, and being very dramatic. The stage was also very dramatically lit with The Killer’s signature big K lit up and a whole netting of small LCD lights hung from floor to ceiling. At the end of “When We Were Young” there was an effective shooting of pyrotechnic showers of fire that really punctuated the moment.

The band played for 1 ½ hours, and left us wanting more. We were hoarse, totally soaked ( a hot night), but energized and charged. We couldn’t believe that after waiting for 5 months, this much anticipated concert was over. But I know I will continue to relive the show over and over again and I will definitely make sure to see The Killers perform live again!
Dictated but not read by StarkNY at 12:11 PM

Email ThisBlogThis!Share to TwitterShare to FacebookShare to Pinterest
Labels: The Killers