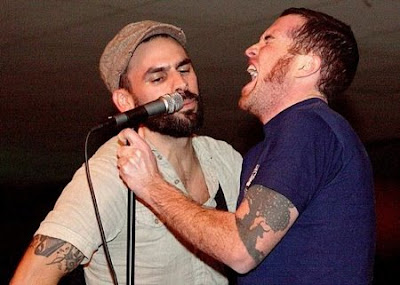 JUNE 26th:
THE ROADSIDE GRAVES @
PIANOS
NEW YORK, NY
[mp3] "Far and Wide"
[mp3] "Ruby"
[mp3] "Take a Train"
We're thrilled to join Aquarium Drunkard in presenting one of the best new bands to come out of New Jersey in the past few years, The Roadside Graves, as they celebrate the release of their third record My Son's Home coming out June 9th on Autumn Tone Records. We've been dedicated followers of this band since they released their fantastic and grossly overlooked last record No One Will Know Where You've Been. Interweaving elements of The Band, John Prine, Townes Van Zandt and a dose of Bruce Springsteen, The Roadside Graves manage to produce a unique and coherent sound, pulsing with the energy of their large ensemble and anchored by the gritty and melodic vocals of lead singer John Gleason. My Son's Home is an 18-song comprehensive tour of quality American music. Deftly moving from folk, to rock, to back-porch country, the Roadside Graves have produced one of the best roots-Americana records of the past five years, hands down. Click after the jump to see the full Piano's bill and the rest of the Roadside Graves' tour dates including a show opening up for another Stark fave Lucero.


PIANOS
9pm Blair
10pm Gunfight!
11pm Roadside Graves
12am The Loom
1am Afterparty at Piano's with R.E.Y. as guest DJ

Dictated but not read by StarkNY at 10:13 AM