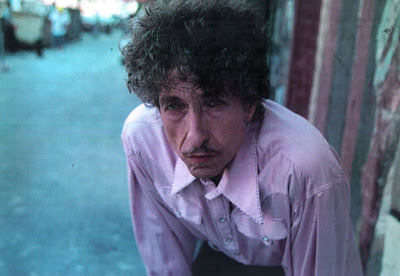 ...The violent new Pulp Fiction meets No Country For Old Men video for Bob Dylan's "Beyond Here Lies Nothin" from his brand new Together Through Life. Although Bob probably only signed off on the script and final product, we'd like to think that this devastating episode somehow crawled out of Bob's gnarly brain and onto your computer screen. Creepy Bob. Really. There was an impressive photo compilation that Amazon billed as the "official" video, but this appears to be the real thing. This vid premiered on ifc.com and is directed by Nash Edgerton and features Amanda Aardsma and Joel Stoffer. Watch the shit go down HERE.

Dictated but not read by StarkNY at 11:48 AM

Email ThisBlogThis!Share to TwitterShare to FacebookShare to Pinterest
Labels: Beyond Here Lies Nothin, Bob Dylan, Together Through Life