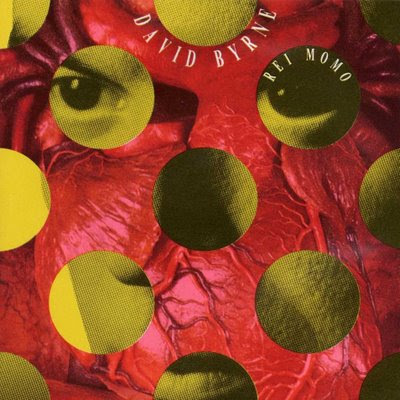 Not that much attention is often payed to David Byrne's solo output after he left the Talking Heads. With the notable exception to his 2008 album Everything That Happens Will Happen Today, which featured his reunion with long-time Head's producer Brian Eno, most solo albums make only minor splashes in the press. To my knowledge, not many have made any significant waves in the sales world either.

Now that the summer weather and spring months are upon us, it's time to dust off the crown jewel of David Byrne's solo output, 1989's Rei Momo. His first post-Talking Heads record showed the direct contrast between the tense, new-wave synth of the Talking Heads and the world-music loving, melody-driven dance music that was going on inside David Byrne's brain. Rei Momo is a survey of Brazilian and Latin music, featuring some of the best Latin musicians in the world and amazing production by Byrne and Steve Lillywhite. Each track moves with a relaxed, lilting feel, creating tension during extended horn bridges before releasing into spacious hook-laden choruses. Percussion drives each song, with horns up front and guitar and drums pushed down in the mix. The results are intoxicating.

On Rei Momo, Byrne employs age-old songwriting tactics to great success, utilizing minor-to-major key changes, tension and release, and dark-to-light color shifts. His lyrics are predictably out-there and bizarre in all the best ways. I could give you a track-by-track break-down here, but I'll spare you the long analysis. Let me just say this, whenever you host a BBQ, go to the beach, walk around in the warm weather, or just sit on your roof reading the paper - put this album on. It's been a part of my spring and summer since I was born, and hopefully it can be part of yours. Buy it today.
Dictated but not read by StarkNY at 11:18 AM

Agreed, one of the best of his storied career.