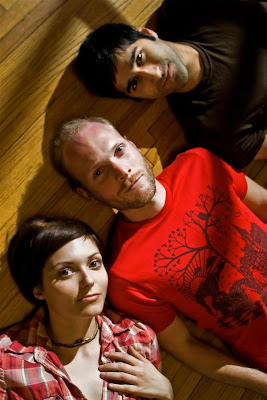 The name Rural Alberta Advantage has been bandied about for some time now, but admittedly, we never really took the time to do some sufficient digging on the group. Our bad. Well, today came the announcement that they, along with the group UUVVWWZ (we hated even typing that name) have signed to Saddle Creek Records. Like the dutiful bloggers we are, we did our homework and discovered, wow, RAA are pretty damn good. So all in all it's a good day for everyone. After being named an eMusic select band and earning the praise of Pitchfork and the Associated Press at this year's SXSW, the powers that be could not deny this trio from the north country. Here's to wishing this band success, as it's always good to see a group rise on the quality of their music rather than a sweet haircut and manufactured buzz. Their debut album Hometowns will be re-released this July with the force a Saddle Creek marketing budget.

Dictated but not read by StarkNY at 3:56 PM