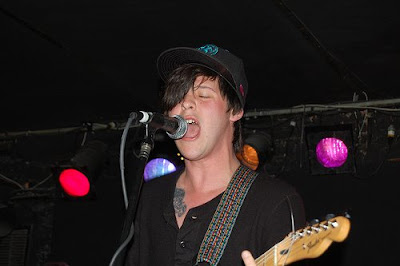 One of the elements of a great rock and roll song has always been hand claps. Ba-bap BAP Ba-bap BAP. You can hear it in your head - that old "I Want to Hold Your Hand" hand clap pattern. This simple rhythmic nuance lies at the heart of almost every Wavves tune, even if no one on stage is playing it. THAT'S what makes Wavves poppy. Other than that, there isn't much else besides gloriously-distorted guitar, endearingly off-key vocals and full-speed-ahead drumming.

Wavves (Nathan Daniel William and drummer Ryan Ulsh) last night at the Mercury Lounge, were tight. "It's been 60 days. We're tired," William said. It didn't really seem so on stage. Their third night in New York proved an odd scene at the usually, quite chatty club. As loud as Wavves' songs were (they could've been louder), the crowd was just as silent during the tuning breaks between songs --it was eerie. This of course prompted fan banter (see above).

More on the Wavves show after the jump...

Wavves require few words to describe their shows. It would seem wrong to write an effusively long post on a compact, efficient, 25 minute rock set. The duo took the stage, turned up the guitar, (answered a cell phone call) and played their three minute rock jams. Yes, at times the melodies recalled the Beach Boys, and yes, Wavves are also from LA. He's got great hair and a Marshall stack. He headbangs, the drummer drums, the songs are catchy and the lyrics simple: "His feet were torn/by his skateboard/ripped jeans to shorts/won't do no chores." It was a fun time. 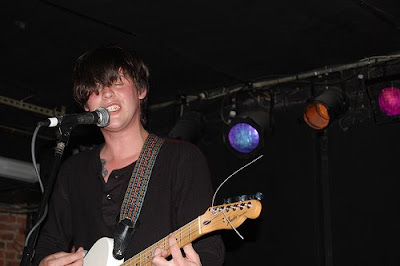 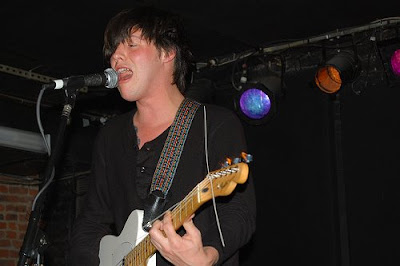 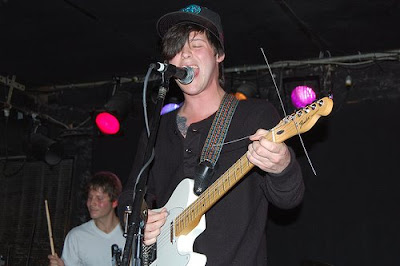 Dictated but not read by StarkNY at 11:43 AM

i have been following wavves around the country like a mid-90's dave matthews lot rat. i have seen all 60 shows and they were all flawless (of course they never played a single song twice). wavves are an unstoppable force that I believe will bring us out of the recession and will reduce Kim Jong Il into tears of forgiveness followed by several months of deep depression and OC reruns on his small, black and white TV. seriously, don't fuck with these kids.