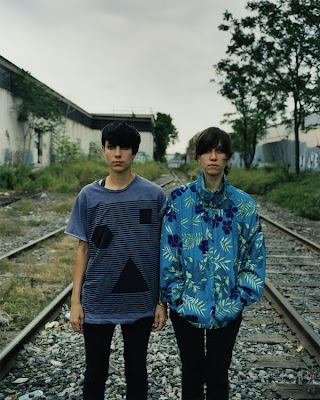 While the title of the post may seem to some a snarky backhanded compliment, let us assure you that if you asked us about Telepathe several months ago the title of this post would have been much different. To get it on the table, we saw the cult Brooklyn dance duo open for No Age at South Street Seaport last summer, and it was one of the most devastatingly awful things we'd seen in awhile. To be fair, that could be one of the worst venues to see music. Ok, so that aside. Their new record Dance Mother, (IAMSOUND) may not have made us 100% true fans of Telepathe, but there happens to be a lot of great stuff on this record. The production is top notch, and there are some true stand-out tracks, including album opener "So Fine" and track #2 "Chrome's On It." Telepathe's beats are thick and bass laden, making for good dance tracks, as well as great headphone listening. The electronics take center stage while the reverbed vocals add touches of melody, and spots of brightness in the midst of dark sounds. Dance Mother is available digitally now, and physically on 4/14. SXSW deets and US dates post jump.

Dictated but not read by StarkNY at 10:29 AM