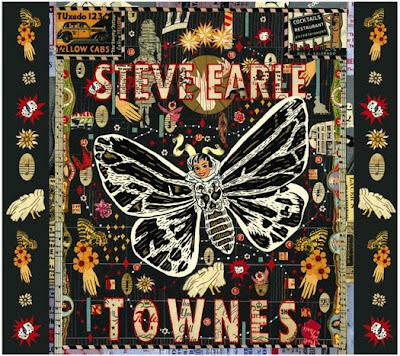 If I ever did one of those Facebook 25 things posts (I won't), one of the facts would be that Townes Van Zandt is my favorite songwriter of all time. In my short career, I've also had the privilege to work on one of Steve Earle's records, meet him, and see him live a few times. That Steve Earle would record a tribute album to friend and hero Townes Van Zandt comes as no surprise to anyone who has heard Earle's now infamous quote: "Townes Van Zandt is the best songwriter in the whole world and I'll stand on Bob Dylan's coffee table in my cowboy boots and say that." Needless to say, I'm really excited for this record, even though Earle's last outing Washington Square Serenade left me feeling a little shaky about the direction of his music. Luckily, Dust Brother John King produces only one tune "Lungs" on which Tom Morello guests. Yeaaah. But it's ok, most of the other tracks feature bluegrass favorites and even Justin Townes Earle's first appearance on one of dad's records. Townes comes out May 12 on New West. See the full track list (which is great) after the jump. Pitchfork is streaming "Lungs." Whoo. Weird cover art though.

"This may be one of the best records I've ever made. That hurts a singer-songwriter's feelings. Then again, it's some consolation that I cherry picked through the career of one of the best songwriters that ever lived."

Dictated but not read by StarkNY at 12:14 PM