Featured:
BLACK LIPS "I'll Be With You"
GOOD OLD WAR "That's What's Wrong"
CARE BEARS ON FIRE "Everybody Else" 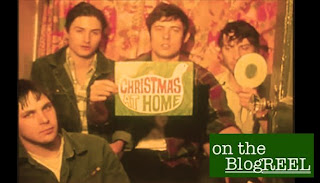 Isn't watching home videos the best, you guys? Every couple of years, your parents dig those puppies out for entertainment and embarassment purposes, and you're never surprised at what you find. More often than not, these videos are about absolutely nothing. They feature you as a kid sitting around, doing something arbitrary like playing with a toy, perfectly content to mind your own business, but perplexed as to why your dad is uncomfortably zooming in on your face for long periods of time while fumbling with his camcorder and NEVER FIGURING OUT HOW TO FOCUS THAT GODDAMN THING. Well, that's kind of what the Black Lips' new clip for "I'll Be With You" is like. Except, instead of playing with toys, the guys are getting drunk and burning their guitars in the family fireplace. Smile!
Meanwhile, Langhorne, PA's finest acoustic folk trio Good Old War are far less extreme in their no-frills, studio-centric video for "That's What's Wrong." The song, from last year's seriously underrated Only Way To Be Alone, is a modern-day update on CSNY, featuring intricate golden harmonies from the group's three members. Oh, and we've followed lead singer Keith Goodwin since his time spent in Days Away, and he's looking more and more like Charlie from It's Always Sunny In Philadelphia (sans the glue) each time we see him. Just an observation. Finally, we're fairly certain that the three girls in Care Bears On Fire have yet to reach Bat Mitzvah age, but that doesn't stop them from confidently rocking out in their debut video for "Everybody Else." We get a major School Of Rock vibe from these chicks; i.e., the song is pretty terrible, but in that "hey, they're young, so good for them!" way. Including this one for the creative paint-by-numbers concept, though.
As usual, you can find all the videos after the jump. It's good to have you back, Blog Reel!

Dictated but not read by Andrew Daniels at 3:09 PM