Nite Jewel At My Kitchen Table 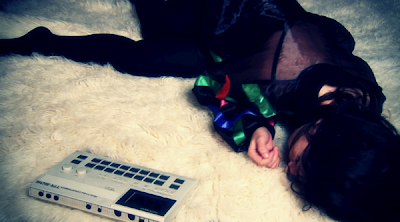 Nite Jewel "Weak For Me" mp3
Watching Nite Jewel perform at Other Music a few weeks back felt strangely surreal. The music contained on her debut LP Good Evening is for dark spaces - close, late night listening. It's not meant for bright store lights, or prime-time. So, Ramona Gonzalez did what seemed logical. She put on sunglasses. Out of any other performer, it could have been viewed as a trite move, a cliche fashion statement. Yet, it seemed to relax Ramona and relax the room. After all, Nite Jewel's music is made in her living room. What followed was 40 or so minutes of reverb drenched, yet lovely vocals, vintage sounding analog beats, synth, and two women making modern music using antiquated techniques. It was distinctly unique and original.

Ramona Gonzalez and her friend Rachelle sat around my kitchen table in the East Village on a lazy Sunday afternoon the day before the performance. We discussed recording techniques, Woo, and the necessity of the 8-track. Read our discussion after the jump. 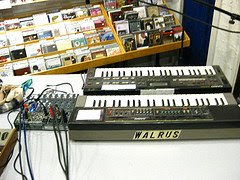 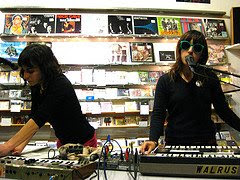 How has growing up outside of San Francisco affected your musical outlook?

Well, there are lots of different answers to that question, there’s a folk scene, a hip hop scene, psychedelic scene, alt rock scene, a punk scene... it’s an infinitely complicated question to answer. There’s a really big music community, not in a hipster sense, in a lame sense (laughs). There are crazy record collectors, Amoeba was founded there and there are lot’s of great DJs.

I was a part of the community there - my mom was engaged in the world / folk music music community. I’ve always been interested in hip hop, the R&B jazz scene is huge, Yoshi's is there, so there is a big jazz community.

Who have you enjoyed playing with the most recently, and who are you currently collaborating with?

Well, I love Ariel Pink's Haunted Graffiti. I was a whistler recently at an Animal Collective show, professional whistler, he says I have to redeem myself (laughs)... I think hes totally wrong about that. I’ve worked with Tickley Feather in Philly... they just signed to Paw Tracks, one woman recording artist. Girls are amazing. They were really really great at Glasslands. I mostly like playing with my friends – maybe that’s lame – but for me playing shows, my criteria for playing shows is just a good vibe.

What compelled you to take such a lo fi approach to recording – was it more out of necessity or a larger creative decision?

A lot of people ask that question. Musicians will work with whatever tools are given to them or afforded to them. Most regular people can’t afford pro tools – I can’t (laughs). I didn't grow up in an environment where digital interfaces were used. In my house, it was all analog equipment, playing board games. I don't work well with digital interface – not that I can't learn – but I work with what I know I will I do the best with - and that's not a computer program. (Laughs) I didn’t get the internet till about 1999.

Do you see yourself changing that in the future?

Well, I just got some money so I bought a computer. Over dubbing is easier, but I don’t trust computers.

Having to keep everything on a hardrive? The fear of that crashing?

I'm talking about trust in a different way. I don’t trust a computer to convey my emotions in an honest way. There is something important about knobs to me. When I’m pushing the resonance up, I’m feeling myself push it, it's physical. The 8 trak is essential to my recording – when there’s that “click” - that sound means that it’s stopped. Why do you think that people like vinyl? It's heavy. It feels good. The visceral quality of analog can’t be denied.

I’ve read a lot about your influences. You press release cited, Woo, Cluster, Sensations Fix. Honestly, I had to do some digging around to find some of these people. Where do you get your music from, and if you could pick someone for people to check out right now – old or new – who would it be?

I usually get my music from friends. I have two really close friends who are avid record collectors. My friend Jason, who released my vinyl LP, introduced me to Woo. I don’t really collect records or music. I don’t really have to do anything – it’s gotten expensive to collect records. Jason just finds life changing music for me. He's definitely responsible for how that record came out. He has this incredible eye where he can find these amazing 25 cent records.

I think Woo is one of the most important artists for me. They started making music in the early 70s or 80s but didn’t find success until the 90s. It's cozy inside. They have a record - Whichever Way You’re Going You’re Going Wrong. It has this picture of a baby that looks very much like Jesus with everyone pointing in different directions, the cover has a lot of religious overtones - well, they are Hare Krishna's.

Jason wrote the bio as well, (laughs) he’s really modest. Cole is my husband, he’s totally blog crazy. He’s one of those mp3 finder people. He could be talking on the phone to someone who tells him about a single and Cole will find it on the internet before the end of the conversation. Cole and I grew up in the same town, we have similar music tastes. We've rediscovered a lot of music that we listened to as kids – Ariel has also introduced me to a lot of great new music.

Woo is the most important band to me ever. There are so many reasons why this band means so much to me. It could be that I'm ignorant and there is more music like this out there... they just represent all the frequency ranges and all the blind styles, but I could be totally wrong about that... My answer to this question may change next week.

Are you working on a lot of new material at the moment? What’s the next record going to sound like?

I’m constantly recording songs, a lot of them I scrap. The recording process is always going to be part of the writing process. How can you write a song before you record it? Recording the song is so integral to the writing of the song. Sometimes, I write a bunch of lyrics down... but the way I take it down... I cant write without my 8-track. Last night, we were sitting in hotel playing a song off this mix... and there’s this drum intro and I said, 'I have to write a song around that drum intro.' A lot of time you come up with funny words... like I want to write a song that has (blank) in the title. Take "Artificial Intelligence" - I wanted to write a song with that idea inside. People will write a song based on an idea, or the music, and there is always more attention played to that part of the song . I think it should be from a wide variety of places that people write songs. If you write music, it emanates from every orifice. The visual queues you get from the world turn into something musical. The guitar is only an instrument... you have to interact with the equipment. I’ve written a few songs on the guitar, but it’s all about - what does the guitar mean for me?

Nite Jewel is more of a recording thing, than a live thing. It’s changing and developing. That's why our live show is always changing. I think about records a lot and the person, and how the record came to be. Recording is a very big part.

What book have you read recently that has blown your hair back?

Dictated but not read by StarkNY at 12:08 PM