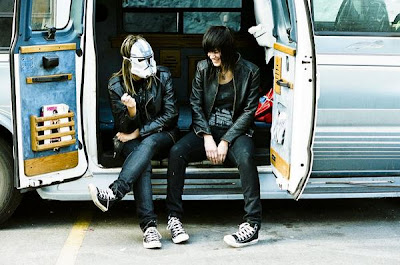 SXSW Day 4: Out with a bang: On a total whim, my attorney and I ended up a party hosted by Vancouver, BC's Mint Records. It was a joyous explosion of rock that made us want to jog in place. So we did. Stay tuned for my SXSW review in pictures.

The Pack AD and The Evaporators at Mint Records' Habana Calle party:
The Pack AD are a bluesy female guitar and drums duo that reminded me of a dirtier, more punky Black Keys. It's rare and feels really good to say that these ladies seriously drop the hammer. Though the songs all revolve around similar blues constructs, their live energy carried them over the hump earning pretty unanimous fist pumps and foot stomps from the crowd. They carried a road worn, self assured presence on stage that heightened the snarly slide guitar and Meg White-y beats. Badass rock chicks excite me. 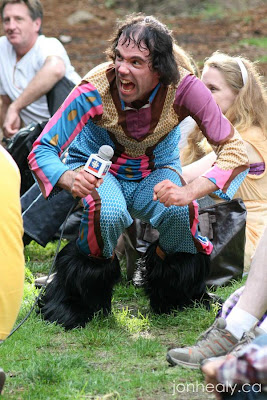 The Evaporators:
What was the best song in the Evaporators set on Saturday night? Hmm, was it "Sasquatch and Me ate Berries for Free?" Or was it perhaps "Gassy Jack?" Oh, I don't know, I think it may have been "Addicted to Cheese." It was really hard to call in the blur of Canadian Maple Leaf laden spandex suits and various calisthenic eruptions. This was, hands down, the most active (and strangely one of the smallest) crowds of any show I saw at SX. Mysterious front man known only as "Nardwuar the Human Serviette" commanded us crouch down to the floor and then leap to the ceiling, to join hands and dance like sprites of the shire, and to hoist him (and his keyboard) towards the sky for a cacophonous solo. For some reason we did all of these things and applauded. Perhaps is was the brain rot induced by the previous four days of beer, sun stroke and ringing ears. I suspect, however, that the Evaporators also had us under the grip of sneakishly catchy tunes about shit that just made us want to giggle. My SXSW could not have ended on a higher note.

Dictated but not read by StarkNY at 9:22 PM

Email ThisBlogThis!Share to TwitterShare to FacebookShare to Pinterest
Labels: The Evaporators, The Pack AD, Tim Emmerick