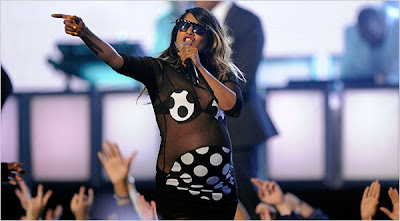 We stumbled upon an interesting article regarding M.I.A in the strangest of places in today's NY Times. On the front page of the International section, writer Thomas Fuller reports on the uneasiness of some Sri Lankans with regard to M.I.A's implicit support of the rebel group the Tamil Tigers in some of her lyrics and images in her music videos. The Tamil Tigers have been fighting in a decades long civil war with the Sri Lankan government. The United States and European countries consider the Tigers a terrorist group, although Amnesty International lays blame for human rights violations on both sides of the conflict which has killed over 70,000 people. This is clearly a prickly issue to tackle as M.I.A has come out against all forms of terrorism, but also hopes to bring to light what she refers to as "genocide" being carried out against the Tamil people in Sri Lanka. Clearly worth a full read of the Times article which is HERE.

“Being the only Tamil in the Western media, I have a really great opportunity to sort of bring forward what’s going on in Sri Lanka,” she said in an interview on the PBS program “Tavis Smiley” last month. “There’s a genocide going on.”

But her political views rankle some people at a time when most Sri Lankans are clutching to the hope that the rebels, branded by the United States and European nations as a terrorist group, are on the verge of military defeat by government troops.

“Frankly, she’s very lucky to get away with supporting, even indirectly, perhaps the most ruthless terrorist outfit in the world,” said Suresh Jayawickrama, a songwriter based in Colombo.

Dictated but not read by StarkNY at 9:53 AM