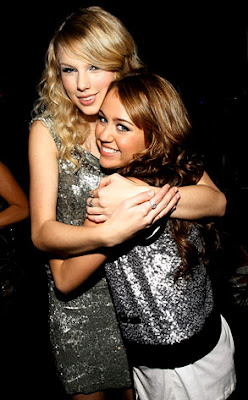 Taylor Swift reigned supreme on the charts this week after a nice little bump from her Grammy performance with that lovable Miley Cyrus. On the back of their Album of the Year Grammy, Robert Plant and Allison Krauss shot up the charts to #2 from #69, selling 77,000 copies of their Rounder record Raising Sand. Plant & Krauss, along with producer T Bone Burnett ,recently spent several weeks in Nashville recording their follow-up. No release date set for that. Other big winners this week were Adele, who sold 57,000 copies of her debut and Coldplay (lame clothes and all...you know McCartney was pissed) sold 62,000 copies of Viva la Vida moving them up the charts from #31 to #8.

Lily Allen's It's Not Me, It's You, sold 70,000 in its debut week, and also saw a healthy jump in the sales of her debut, Alright Still, which sold 6,025 copies, a +327% increase from last week. How can you not root for Lily? Her new record is filled with pop amazingness and is produced by knob twiddler to the stars, Greg Kurstin of bird and the bee fame.

Did we really just post about Miley Cyrus, Coldplay, AND Taylor Swift? Yeah, I think we did. Gross.

Dictated but not read by StarkNY at 2:18 PM

wow, the music industry is, like, sooooo f-ed. I mean 77,000 copies is still an astonishing number to us indie bitches, but those are the biggest records of the year? I heard that even the Jonas Bros. who are bigger than jesus only sold like 2 mill. It's not even a bummer that the media is shifting, but it seems like the "really big bands" aren't even all that big anymore. How do the mid levels move up the chain when the huge bands only sell 2 million copies? And half the big boys don't even have openers anymore . . . I think we should all just bail and sell cars. Shit. Actually, lets all bail, shoot HGH and sign with the Yankees.

who is this "tim" and why is he like, robotripping all the time.