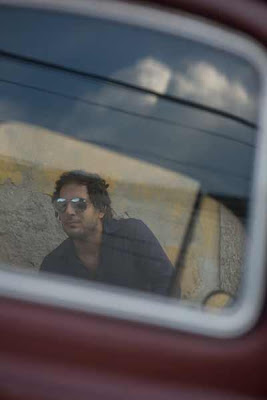 Click after the jump for more from Marcio Local including a live session at the tripwire...


Stark had the fantastic opportunity to attend Marcio's first NY show at Zebulon in Brooklyn, which also happened to be his second show in the US ever. Coming on somewhere around midnight, Marcio and his band turned Zebulon into an (unexpected) dance party. As frequent concert go-ers, we were incredulous as to how the Brooklyn crowd would react to his music. In a conversation earlier, Marcio commented through his fantastic translator Jessica, about his perception of American crowds. "The fans in Brazil are used to this style of music, this is normal for Brazilians. I feel the Americans will be more surprised by the music we make. Because they are not used to the music [I think] they will be more uptight. People here pay more attention."

Yet, luckily for everyone, the Zebulon crowd did well for themselves and embraced the energy and joy that Marcio and his band put into every song. While the record focuses more on traditional song structures, Local's live show operates more loosely, jamming when necessary and extending various solo sections. This succeeded in giving Zebulon more a party atmosphere, rather than a typical stand around, shut-up and listen type of show. It was perfect. Local brought full doses of happiness and raw passion - two attributes found rarely in live music around Brooklyn these days. The show and interview were truly refreshing and a genuine pleasure.

When asked about the common threads or themes that hold his music together, Marcio Local summed it up simply and perfectly: "Music is what I live and feel - that is what ties my music together. I take pleasure in living things and sharing them with others. [My music] is very simple and true and that's what makes all the difference."

Dictated but not read by StarkNY at 12:35 PM

That was UNBELIEVABLY excellent! I love the sexy samba beast.