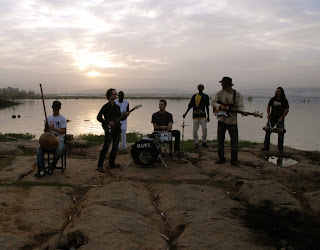 Photo credit: Paul Chandler
Who said Western-African-influenced-rock-psyche-jam-pop can't come from Asheville, N.C.? Toubab Krewe has been pulling it off since their formation in 2005. Playing festivals such as Bonnaroo and the ever-obscure, Desert in Essakane fest in Mali, this band has synthesised and absorbed music from the road. Drawing elements from Mali's own Tinariwen as well as Toumani Diabaté, their African-style jams add new life to a somewhat fleeting music scene. They were recently featured on NPR's All Things Considered and have a new release titled, Live at the Orange Peel. What are these guys listening to while on the road? Well, they recently offered their post-show, after-hours playlist via Myspace. There is real eclectic mix of music here, all of which deserve a good listen. Dig it here. They are also on tour right now with dates after the jump.

Dictated but not read by thestarkonline at 2:09 PM