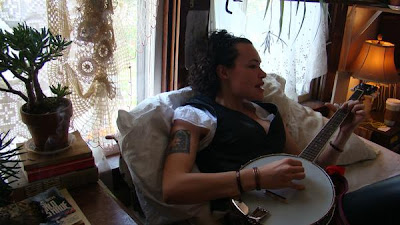 Several weeks ago, we had the lovely fortune of spending a part of the evening on the phone with breaking artist Larkin Grimm. The interview that followed was as captivating and engaging as any we have undertaken in the past. Not only is Larkin Grimm a fantastic songwriter, as evidenced by her newest record Parplar (Young God), she is also a charismatic storyteller. We could have spoken with her for hours, or more realistically, let her spin yarns about her amazing life to date, and her unique approach to songwriting and singing. What follows below, is just the tip of the iceberg as to what Larkin Grimm has to offer the music world. All of her experiences seem to flow out of her through her music, in lyrical form as well as in her instrumental influences. Grimm seems to embody many characters across the course of her record, and this interview gave us some insight on where some of those characters come from. Enjoy, we sure did.


Parplar recalls many places… there also seem to be many different styles at play that hold together incredibly well over the course of the record. Where did you write most of the album?

When I started making the record, I was in Georgia. I was trying to live down there. Southerners are very special (laughs) and I wanted to live down there. I’m a Southerner. You know, I would come north and lose my southern accent, so I really wanted to live there. I had just come back from this amazing experience at the Clifftop Appalachian String Festival. Every night, there are these jams and you walk around from tent to tent, and they just have these jams and they set up the bbq and the tent and they play these old family songs. I would just walk around from tent to tent with a mini-disc - just recording – that’s where it [the record] started. (Laughs) there were lot of old punks there. Mostly it was these old tyme people. I had never taken folk music that seriously before, I started to think about it and I was like 'whoaaa.'

After Georgia, I went to this place, the Omega Institute. I was workin' as a sound technician for these spiritual gurus – very much a commercial, new-age business. I was a sound woman for these people. It’s really crazy setting up the mics and there are 500 people in a room who think this person is Jesus Christ. Having grown up in a cult, I just don’t believe any of that. I would just talk to them like regular people… all of these new-age spiritual whatever. I was sitting in the back of the room recording these speeches, tweaking their sound getting all of this crazy religious stuff. At the time, I was living out in the woods with coyotes howling, and showering in the communal shower. I had a long extension cord running to my tent and I was writing and recording and sending these things to Michael [Gira] and he was getting a kick out of it… I was making these songs, at the time there was just real good wisdom and advice coming in.

After that I moved back to Providence ... Providence is a really creepy and beautiful place almost. It used to be a manufacturing town with these old warehouses - almost post-apocalyptic. I was living in this hole in the ground next to like the most toxic river in the country, it was like the rainbow river, it had that gross oil slick on the top of it, with all sorts of awful smells and fumes coming off it. God I was living in total poverty – it was so gross, I wrote the last third of the record there.

What instrument do you write songs on? Guitar? Piano?

Everyday after school, my dad would pay me a nickel to tune and dust the instruments in this old store. I felt completely comfortable tuning them and touching them – living in that store basically I had constant exposure. I had this amazing exposure to bluegrass flatpickers – all sorts of musicians and blues players came through there. Yet, after awhile it all started to sound like bull shit to me though – it didn’t move me.

I love writing songs on the dulcimer – tuned in the diatonic scale. I also love the Guzheng. I also used this old broken keyboard that just had these great sounds.

Ive always thought I had 4 different voices, each corresponding to each of my personalities - it's a female thing corresponding to the roles we are forced to play in society. There’s the virgin, the whore, the crone or the witch, the little girl ... if you talk to any woman she’ll be able to understand. There's this phenomenon of women watching themselves. They watch their own actions and it causes this, what Freud used to call 'hysteria' – this insanity… women become so self-conscious. I mean - it was not too long ago that we were basically slaves… a lot of women won’t talk about feminism, you know, we're equal now, so we shouldn't talk about it. Yet, we’re still fragmented. I have to sing in a different voice to express these different aspects of my personality. (Laughs) I’m a little crazy, but most people are. I just started reading The Golden Notebook by Doris Lessing... this famous feminist book. So, I started reading the introduction and she wrote in 4 different diaries, I was like oh shit! That’s like my 4 different voices! I used to do overdubs and get all 4 on one track – like hey – that’s me.

How has it been working with Michael Gira?

He’s the first person to ever hear my music. I made one recording when I was 21 and only sent it to Michael and was like “what do you think?” He was like 'wellll you can’t sing on tune, and you can’t really play but I love it!' I mean he wrote me back – amazing! At the time, I didn't know any other musicians, I wasn't a musician, he really encouraged me. A few years later, some of his friends came to see me play and I gave them the record I had made. Then Michael wrote me this angry letter, like 'what the hell! I thought you were going to keep me updated on everything you were doing! What is this Secret Eye Records??'

(Laughs) I’m very stubborn – I’m from the South, it’s tough. Especially for women… you’re supposed to be stupid, you're supposed to be dumb. If you’re smart, you’re supposed to act like you’re dumb. I wanted to escape from that and do everything myself. Once I had done that – I was like ok - I’m ready to work with Michael. I knew that if I was collaborating with this guy it was going to be an intense experience. He is a really strong and dominant personality. I didn't make a record with him until I knew I was ready to do that. I knew it was going to be a collaboration. When I was working on it, it felt like he was bossing me around. Yet, he brought out the ME in me. It was weird, it sounds like me, it doesn't sound like him – it’s mine – this is me – it’s this amazing weird alchemy that was happening. It was like he was my battery – giving me this life-force – this mystical being with magical powers – I think I’m making my best music, and I’m proud of the music I am making now.