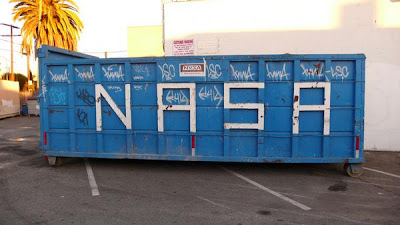 Here is another taste from the D.J. Duo of Squeak E. Clean and DJ Zegon recording under the N.A.S.A moniker. It's become well known by now that their upcoming record The Spirit of Apollo features 250,000 guests* and looks to be one of the more interesting releases of the first quarter. Anti releases said record on February 17. The above track features the oft-paired and compared duo of MIA and Santogold (Santi?). Taking the lead in the verses are the Diplo approved hip hop group Spank Rock with a little guitar wah thrown in by Nick Zinner from the Yeah Yeah Yeahs. There is a NY CD release party Jan 29 at Le Poisson Rouge on Jan 29 and another in LA on the 27th. More dates after the jump.

Dictated but not read by StarkNY at 9:07 AM