New York Times Weighs in on The Tallest Man on Earth 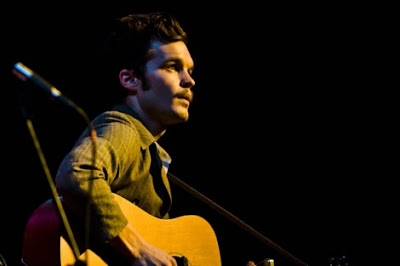 We caught the Tallest Man for the second time this week last night opening for Bon Iver. To go along with the kudos the Tallest Man's record has already received from Pitchfork and Paste, the New York Times ran a fantastic review of his Mercury Lounge show (12/9) in today's paper. While reviews of his stage show have spanned from "captivating" to "a total ham" no one is doubting his songwriting, guitar playing, and the quality of his product. What we have here is clearly someone new on the market inciting debate and demanding attention. It just so happens we here at Stark really love his tunes.

Unlike most acoustic-guitar slingers, the Tallest Man on Earth performed in constant motion, staying at the microphone only when he had verses to sing. In between, as his fingers rippled through his guitar patterns, he prowled back and forth like a panther pacing its cage, glaring at audience members near the stage. But his songs aren’t confrontational. They’re full of restless journeys and existential longings, with a few hints of romance. Alone and fully self-sufficient with his guitar, he sometimes admits he’d like company. NYT

Dictated but not read by StarkNY at 11:14 AM