Stark At Large: The King Left 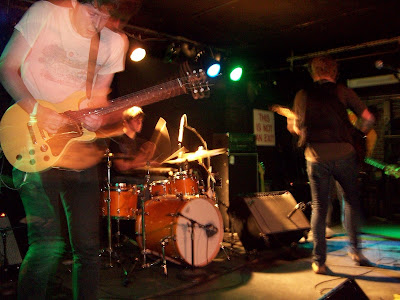 What makes a quintessential New York City band? Is it being poor but somehow scoring cocaine on a regular basis? Is it looking so cool that you don't remember how you got into those jeans? Is it loving New York but pretending you don't?

Or is just being an ace group of guys like the The King Left?

At the Mercury Lounge last week Corey Oliver (lead singer and guitarist of the aforementioned band) asked, "Can u turn the lights down and turn them up when we get to rocking?" adding "That'll blow everyones minds."

Review, plus exclusive interview with Corey, photos, tour dates and more after the jump...

The King Left kicked off their mini-tour with the Howlies to a packed house. It should be noted that people kept screaming "Ian!" (bassist of the band...) Corey may be classically handsome, but Ian seems to have a charm all his own. Graham Awesome on drums and Mark Grisson on guitar complete the foursome. I am a fan of both of their EPs: self-titled and New York Nothing. But I have to admit, the show exceeded my expectations. This group of friends clearly have a musical chemistry -- each of them played a part in a solid, full sound... sad to say but that is hard to come by these days.

I felt bad for Corey because no one was calling out his name, so I did an interview with him - read on for the revelation that ::gasp:: they're not really musicians!? Also what's so great about New York and what's next for The King Left...

Can you tell me a bit about the initial formation of the band?

We're not musicians. I feel bad when people assume we (or at least I, and I know Ian can relate to me on this) assume we know what we're doing or that we're technically proficient and ask us to jam or play with them, and I'm thinking, "I only know the names of three chords and scales scare the shit out of me." That said, we didn't come together as musicians seeking out other musicians to create with. If anything, we're four songwriters that came together by chance to write songs the only way we know how – trial and error. It's strange where you end up when you go to college for filmmaking.

Who are some of your idols?

Dream people to play with?

I can't give you one definitive answer for the band on this one, either. I can say tell you that four of us would definitely say Radiohead, though. Personally, I would love to play with Deerhunter right now. In my head, all of our songs initially sound like Deerhunter songs before the band gets a hold of them and they turn into The King Left songs. Bradford Cox just seems fearless and endlessly talented to me. I wish he would start giving lectures. I'd pay tuition, sit first row, and write "Love" and "You" on my eyelids like that student in Raiders Of The Lost Ark.

I really can't say enough about New York. Anyone who says they don't like New York obviously doesn't leave their apartment. It's just a bottomless well of culture and scene and opportunity, if you want it. If you don't, if that's not your thing, I can understand that. But I love everything about it. It's also one of the only places I can feel good lost (thank you, BSS).

How did this tour with the Howlies come about? And where are you the most excited to play?

I forget how I heard about Howlies. I think I just sort of stumbled across them and instantly fell in love with their video (and song) "Aluminum Baseball Bat." I was also psyched to hear another awesome band hailing from Atlanta (my home town), so I did my best to push them on the other guys. I was apparently late to the party, because Graham and Ian had already heard of them through friends and word of mouth. I made a point to check them out when they played The Charleston and try to be chummy without coming off as a fanboy. I was totally floored by their live show and immediately knew they were a band I wanted to play with. We're really lucky to be call them tour mates for a week. Can't wait to play DC.

What's next for The King Left?

We have a new batch of songs recorded that we're trying to parlay into a full length album early next year. Once that's wrapped up, expect massive improvements in the global economy, class struggles, and foreign relations. I know Obama's going to try to take credit for it, but, trust me, it'll be a direct result of the release of The King Left's debut LP, Yay For Good Stuff! Oh, and we'll probably be opening for Radiohead or something. 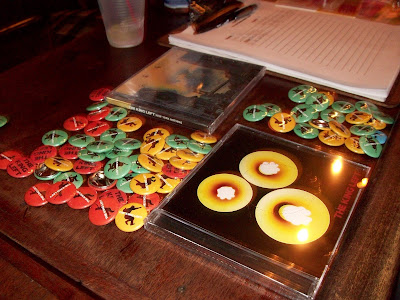 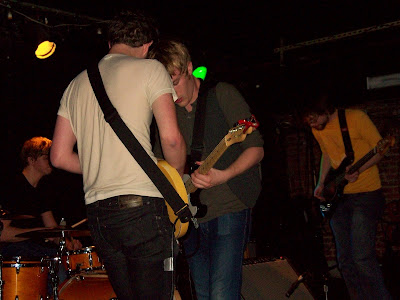 Dictated but not read by thestarkonline at 11:29 AM

I love this band. I also love long walks on the beach, a fine cup of coffee and pinball.