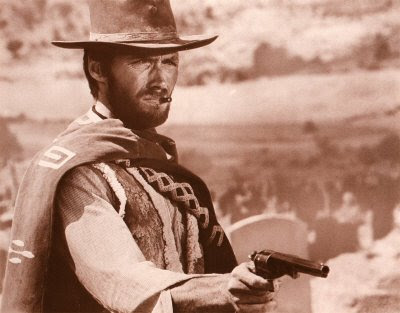 I LOVE Clint Eastwood. I always have. It's awkward to admit this publicly, because he's old enough to be my dad (or, uh, grandfather), but to me, he's timeless. He's old Hollywood. A man's man. And, in my defense, this weird affection was born from watching Eastwood's spaghetti westerns when I was a kid – movies originally released in the 1960s when he was only in his 30s. Yeah….it's still creepy, isn't it?

Anyway, Eastwood is back, in his first major acting role since Million Dollar Baby. It's this movie called Gran Torino, which I haven't bothered to learn that much about except I gather it will be released early next year. But as I read on Gawker this morning, Eastwood sings on the score. Apparently this is becoming some sort of trend, with Ed Harris pulling a similar stunt. Whatever, I only have eyes and ears for Clint.

You can listen and judge for yourself on the film's website – play "Gran Torino." Suffice to say, I'm going to pretend this song doesn't exist in order to preserve the illusion that Clint is still the young outlaw I fell in love with all those years ago -- rather than this rasping old man who has obviously plunged headfirst into senility. I'll be watching this trailer for the rest of the day if you need me.

~Ashley Herriman (Stark contributing writer)
Dictated but not read by thestarkonline at 11:22 AM