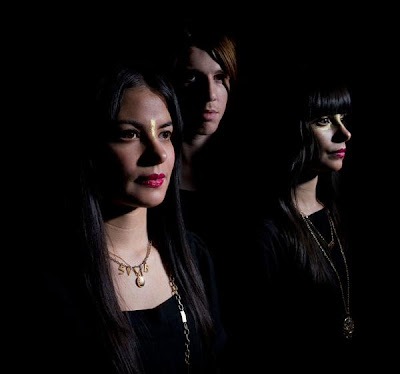 Yesterday, we picked up the new record, Alpinisms from School of Seven Bells, and while we've only listened a few times since yesterday, we can say that it's pretty damn excellent. As per the usual, before we could write about it, Pitchfork slapped it with an 8.0 and a recommended status -- but we shall not be deterred!

The record get's a little long towards the end (it's almost an hours worth of music,) yet, Alpinisms is consistent and dutifully crafted. Formed by Ben Curtis of the Secret Machines, this is the group's first full-length effort. The band has described the record as "mountain climbing music" and it seems to be just that. Each song develops well and constantly progresses to its dark and chilling natural peak. It's melodic, organic, and electronic all at the same time. That works perfectly for us. STARK recommended.

School of Seven Bells plays this Friday, Nov. 14, with another Stark favorite M83 at Webster Hall in NY. Should be a great show.

Full tour dates with M83 after the jump...