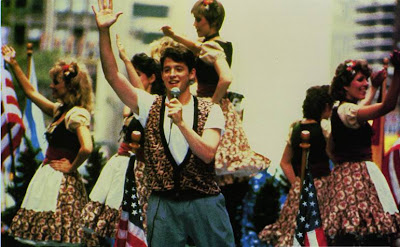 File this one in the "marginally about music, but still awesome" file. According to reports on bizbash.com - at this year's Halloween parade in the West Village (of NY), there will be a full-scale recreation of that amazing downtown Chicago parade scene in Ferris Bueller's Day Off. Scantily clad bar-maids and other vintage 80's-style folks will once again dance around a glorious German themed float to The Beatles' "Twist and Shout." We usually stay away from the parade like the plague - but this could be some damn good fun to watch.

"Event organizers confirmed Tuesday that the Ferris Bueller float will be a participant in this year’s Village Halloween Parade.

The brainchild of artists Mina Karimi and Kara Suhey, Project Bueller aims to recreate the Von Steuben Day parade scene from the 1986 John Hughes film Ferris Bueller's Day Off. The scene in question, you might remember, finds Matthew Broderick taking over a parade float and inspiring much of Chicago to join him in a round of the Beatles’ “Twist and Shout.”

In addition to participation from people on the float (who will be wearing matching barmaid uniforms), organizers are hoping parade watchers will help out. Everyone is encouraged to wear '80s business casual attire for added authenticity.

“It’s just the kind of thing we love,” said the parade’s artistic producing director, Jeanne Fleming. “The Halloween Parade, in one sense, is the Art Parade. A lot of the same folks work on both. And if you’re going to put that much effort out there, you might as well get it seen by a million people.”"

Fist pump to TICE on this one.

Dictated but not read by StarkNY at 5:02 PM

Email ThisBlogThis!Share to TwitterShare to FacebookShare to Pinterest
Labels: Ferris Bueller, the beatles