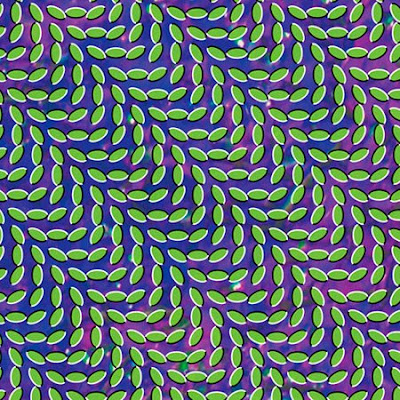 Tuesday night I trekked up to the nosebleeds (145th and Riverside) to attend my first-ever “listening party”, hosted by Motormouth Media and Domino Records, in honor of Animal Collective’s much-anticipated new album, Merriweather Post Pavilion. It was worth the trek.

Despite the odd location (The Riverside Lounge? I’m pretty sure nobody ever goes there), and the positively heinous sound quality, I had myself a grand old time. While most records, and Animal Collective’s in particular, require several listens to fully digest, I feel confident in saying that the new album is thoroughly banging. Over the course of its 11 tracks, the album is ethereal, dancey, melodic, aquatic, and interestingly enough, more accessible than any AC album to date. Gone is the fabulously, crazy-vocal exhibition from Avey Tare that we heard on Strawberry Jam. But, in its place are so many thumping beats, whispers, and fluid harmonies that I hardly missed it. If you weren’t already excited for the new album, get excited. Merriweather Post Pavilion is out Jan. 20, 2009 in the U.S. and Jan. 12 in the U.K.

Dictated but not read by StarkNY at 8:23 AM

Glad to see your site coming around to reality.