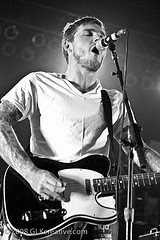 Fact: The Gaslight Anthem's fans could kick the shit out of Hold Steady fans. Yet, walking around the Roseland Ballroom last night was like walking through about 15 different Hold Steady songs at once -- young-rock kids sucking face by the bar, crowd surfing and riding high off the buzz from drinking their smuggled booze on the train from New Jersey. We were basically looking at thousand Craig Finn's in training. Yet, the main goal of the evening was to see if New Jersey band, the Gaslight Anthem, were worth their salt...to see if their live show matched the passion and quality of their new record The '59 Sound; ultimately, we just wanted to know if this group could be more than an overly-derivative Springsteen-style rock band. To our pleasant surprise, they were. Full review after the jump... 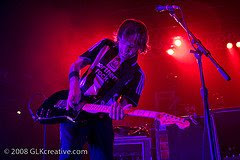 Opening for Alkaline Trio, and Rise Against (sure, why not), The Gaslight Anthem have scored themselves a strong tour with a devoted fan base -- playing two sold out nights in New York. The Roseland was practically filled for Gaslight's opening set at around 7:15 pm. The New Jersey faithful fist pumped, clapped, and sang along with a devotion and passion sorely lacking at almost every indie-rock show we've seen this year. It was refreshing. Gaslight powered through their set of melancholic and nostalgic rock/punk tunes -- singing of lost songs, old radios, high-top sneakers and sailor tattoos. Did they channel Springsteen? Of course they did. Lead singer Brian Fallon had done his homework. He mirrored the Boss' on-stage mannerisms as the band employed E-Street style build-ups, energizing the crowd before launching into the chorus.

Like all great bands, the Gaslight Anthem didn't set out to emulate their idols. All the above similarities came from an internalization of their influences - from years of listening to and digesting the Springsteen catalog until they reached a point where they couldn't sound like another band if they tried. Of course, the Gaslight Anthem draw from more than just Springsteen. There's a lot of Replacements in there, Pouges, and yeah, even some of the Misfits characteristic knack for writing hooky-punk choruses. What's to come for this band remains unclear. The black hole that is the state of current "modern rock" could swallow them up forcing them to change their sound and cater to the large pseudo-emo fan base out there. That would be a shame. Or, they could walk that fine line, play a careful balancing act, and draw from not only the modern rock/punk crowd, but also manage to dip into the ever growing fan bases of bands such as the Hold Steady, Drive-by Truckers and Kings of Leon. Whatever the outcome, one fact remains clear - the Gaslight Anthem made a great record and can back it up live.

Oh yeah - in terms of the "ultimate rock showdown"... we would pay to see Gaslight fans take on Lucero fans. Or better yet - Brian Fallon v. Ben Nichols. Now that's a way to spend a Monday night.
Photos by: GLK
Dictated but not read by StarkNY at 8:31 AM