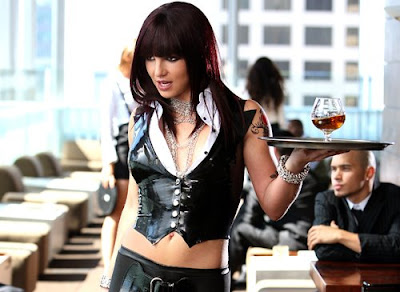 So, the new Britney Spears video for "Womanizer" is pretty hot. I have to give the girl credit -- she really seems to have turned it around. Though her voice is oddly tinny and robotic I'm sure the song will be wildly popular and the video definitely rivals "Toxic" in terms of provocativeness.

That said, what I find most interesting about the song is the fact that it premiered on the ABC "news" show 20/20 Friday night. Unfortunately, the powers that be have taken the video off the ABC website, which means you can't see the hilarious "reporting" that went along with it. You can see the video via YouTube (embed blocked!). 20/20 charged some poor sot named Chris Connelly, who is a regular contributor to Good Morning America and 20/20 and an ESPN correspondent, with stringing together a little segment. He actually has a pretty impressive resume so I'm not sure how he wound up on this "story" except that I guess he's a fixture on the red carpet at the Academy Awards.

But I digress -- first, the 20/20 anchor referred to Brit's latest "achievement"...becoming the most searched person on the Web. Then Connelly said a few words about Britney's three MTV VMAs this year and praised her "clear-eyed comeback" as a guest star on the sitcom "How I Met Your Mother." Then they played the video, which they warned viewers was a little spicy. Don't get me wrong, Spears has come a long way from shaving her own head and putting on an English accent in public, but why her trials and tribulations qualify as news is beyond me.

Dictated but not read by StarkNY at 2:16 PM