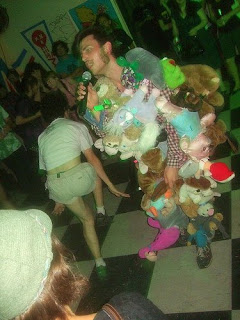 Perhaps it was the buzz from a days worth of cheap beer, but the most fun we had all week was at the Luaka Bop showcase at Santos Party house on Friday. The DJ was spinning some great tunes from their back catalog as things began to materialize seemingly out of nowhere. All of the sudden my compatriot was wearing a snakeskin jacket (with zipper) and a blond wig. Soon, members of the band Terror Pigeon Dance Revolt had outfitted half the audience with costumes... wigs, hats, inflatable-pink dogs and monkeys. Then, as the music began (which can be described as pseudo annoying dance music for the nerdier sorts, with hints of catchy-ass Latin rhythms thrown in) the lead singer appeared draped in a suit of stuffed animals. Add confetti shot from fans and we had a regular Flaming Lips- style dance party on our hands. It continued for about 20 minutes, with the protagonist eventually changing into a suit of Christmas lights. Then, abruptly the show was over. It was perfect. There was no real opportunity to grasp what was going on, nor for it to go stale. As surprisingly as they had come, Terror Pigeon Dance Revolt were gone. We can't say their new 3-inch record thrills us all that much, but for a Friday evening at 6:30pm, their set was the perfect pregame cocktail. Thanks to Tell All Your Friends PR for this one!
Photo credit - thepiratehat (from Death by Audio August show)

Dictated but not read by StarkNY at 9:01 AM