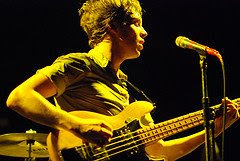 We caught the Friendly Fires twice during CMJ and they were clearly one of the best we saw all week. We have one Ms. Lucy Wood to thank for getting us out to the Annex on Wednesday to catch the UK quartet in action. They did not disappoint. Blending the best from bands such as Hot Chip and Radiohead (at their most rock and roll,) the Friendly Fires brought passion, great songs, great voices and excellent musicianship to the stage. With heavy use of cowbells, an alternate percussion set and various electronic keyboard elements, the Fires created pulsing-dance-rock; their sound was surprisingly much larger than one would expect from a quartet. We loved them so much we made sure to haul ass to get to Pianos by 3 pm to see them again at the Brooklyn Vegan day party. Although it took them a bit longer to get warmed up (I mean it was 3) they eventually brought the intensity to match the show the evening before. We ran into lead NY Times music writer Jon Parales during the show, and even Mr. Parales let on that the Friendly Fires, were one of, if not THE best thing he had seen at CMJ to date. Although it's hard to judge the buzz during the actual marathon, we received text messages and emails all telling us to make sure we caught them. Hopefully they can ride their CMJ successes to bigger things in the upcoming year. The Friendly Fires self titled record is out now on XL. LIVE VIDEO FROM LEVI'S/FADER FORT AFTER THE JUMP. 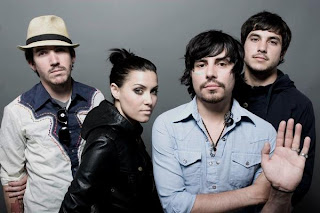 The best thing about the week of shows during CMJ is accidentally stumbling upon a band on the brink of the big time, when no one else seems to be watching. We found ourselves at the Bowery Ballroom on Wednesday night to catch Shugo Tokumaru and Cory Chisel at the Sony showcase. After great sets from Chisel and Tokumaru, California new-comers Audrye Sessions took the stage. After a slow start, they brought on various guest musicians forming a small chamber ensemble (strings and wind) to complement their quartet. From there things took off. The results were a blend of sweeping U2- style arena-rock, mixed with an infusion of Oasis pop songwriting. While maybe not our personal favorites, Audrye Sessions is clearly a band with a skyward trajectory. Signed to the new Sony imprint Black Seal headed by trusted industry veteran Matt Shay, Audrye sessions are a market ready band with the image, money, and music to make a true push into the mainstream. They have an EP coming this fall and a full length planned for Januray 2009. It will be interesting to see what comes from a band with this much potential in a market-place still plagued with challenges.


Friendly Fires at The Levi's® FADER Fort NYC
by thefader
Dictated but not read by StarkNY at 9:52 PM